By now,we were getting used to train hopping and so the short trip to Watchet seemed perfectly normal.I had never been to Watchet before,but had always wanted to visit it,having known of it's Saxon history.We wandered down to the harbour and had an ice cream,before wandering off in search of the sound of 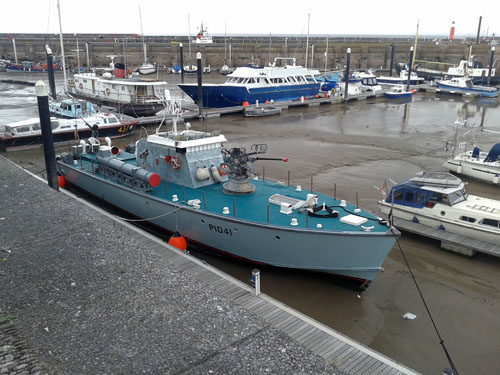 bagpipes that we heard.

Apparently this chap is following in the footsteps of his grandad,who started off a tradition of playing the pipes around Watchet.We located the racket,sorry music coming from the end of the harbour walls and walked over there to have a look.

Here I should warn you that the harbour walls have no railings around them and I almost had kittens with my kids,who don't  always listen or see the danger.Be very careful here as there is a 30 or 40 foot drop.After that we visited the free to enter museum,which is worth a look,before heading back for our next train. 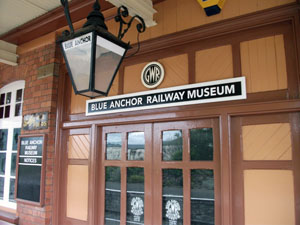 We next headed to Blue Anchor.I mainly wanted to go here,as I had this old slide picture of my dad years ago at Blue Anchor and wanted to see if I could find where it was taken.My dad was evacuated to Somerset during the war,but I don't know where and I can't ask him as he's been dead for 34 years.Maybe he came to Blue Anchor to revisit where he had been evacuated to?Anyway,my brother and I matched up the picture to where it had been taken(see video)......the beer garden of the Blue Anchor Hotel!

We spent the rest of our time here on the beach,before heading back up past the level crossing and to our platform.There are some interedting things at this station,including the signal box, many old advertisment signs and the Blue Anchor Railway Museum.Soon our steam train rolled in and we set off on our sixth and final train ride of the day.