"But what about the fact that the railway was losing £140 million a year?" I hear you say and,"Well,what would you have done then?"

Well obviously any answer I might give is with the benefit of hindsight,but this is what I think Beeching should have done.

Instead of massive immediate cuts,people could have been warned that their local station was under threat if they didn't use it more,so that at least they had an opportunity to change their transport habits or find ways to promote their local station.If after a set time,maybe a year or two,things still hadn't improved,then instead of the station and or line being totally dismantled and destroyed,it could have been "mothballed" until a time when it might be needed again.Yes this would still have cost money,but to me the price would have been worth it and anything would have been better than totally destroying these rail assets.

To rapidly and totally destroy the rail infrastructure that had been built up over decades,without any thought of future transport needs and population increases and putting all your transport eggs only in the motor car basket seems really narrow minded to me.Unfortunately though,when was there ever a government that that had the ability to look to any future past the next election?

You can bet that today,if as I say these lines had been "mothballed",many of them would be back in service and profitable again,including our beloved Exe Valley Railway,although instead of steam trains we might have electric trains running up and down the Exe.

What people also forget is that since the railways were nationalised in 1948,3000 miles of line had already been closed before the report was even produced,so it wasn't just Beeching cutting the railway,but an ongoing trend.

But what about  the Exe Valley?The line supposedly made a £46,500 loss every year and was therefore one of the lines targetted by Beeching to be closed.The people of the Exe Valley protested and complained about the closure,but there was little they could do and so it was that on Saturday the 5th of October 1963, the last ever train travelled down the line.

Instead of the usual steam engine,it was a diesel that carried the last train,which was a disappointment to many,as it was the steam train,that was their main memory of the line.Whether this was a deliberate act by the powers that be,to some how lessen people's emotions I don't know,but to me the last train should of without any doubt have been pulled by a steam engine,it's whistle hauntingly calling out,as the train slowly faded and disappeared down the line,gone forever.

There was a party atmosphere and large crowds at every station and halt.Many boarded the train,whilst others just cheered and applauded as the train left their little station for the final time.Others were upset for the loss of something that had been such a big part of their lives.Despite the celebratory atmosphere,many knew that they were watching something irreplaceable being lost,so the whole event was tinged with saddness. 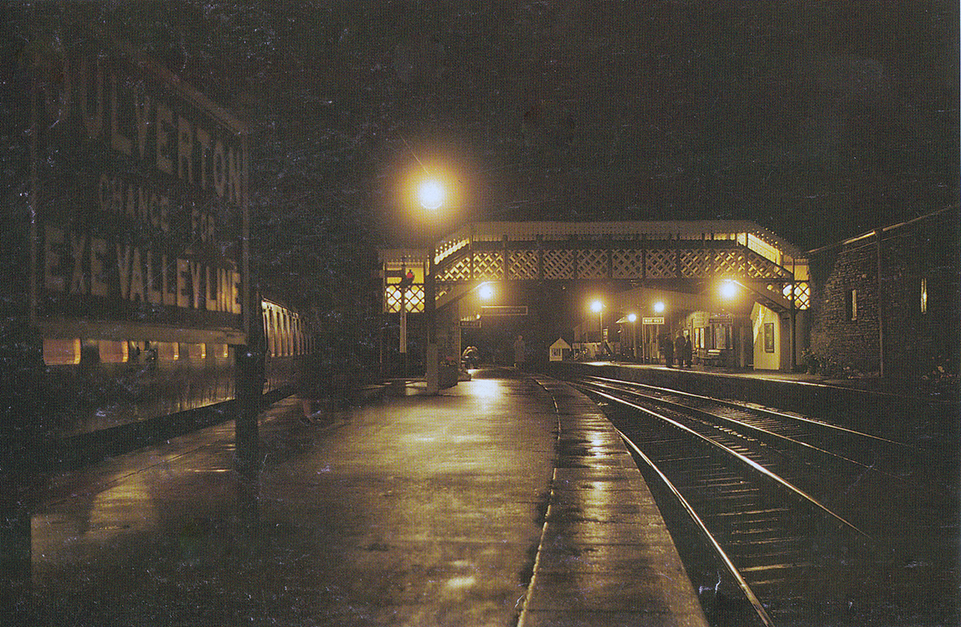 When the people of the Exe Valley awoke that Sunday morning,they no longer had their railway.

In the weeks and months that followed,the regret about losing the railway deepened,especially as the much heralded bus service that replaced the Exe Valley Railway,failed to live up to expectations.Passengers complained that the journey from Brushford(Dulverton Station) to Exeter now took four hours by bus,almost three hours longer than the train used to take.It also came to light that the bus services were being subsidised by British Railways by £65,000 per year,almost £20,000 more than the losses the line supposedly made.This amount was denied by BR,but they refused to say what the figure actually was.

All in all,most people considered the closure of the Exe Valley Railway as a huge mistake,a view that is still strongly held by people to this day,including myself.