04/9/18  I was recently contacted by one of our readers Barry Hilton,who when younger and on a family holiday to the Southwest,took some pictures down at Exeter St.Davids.

"Taken 'in my teens', by a SLR Dacora II camera, on Ilford colour film, 120 size negs (2 1/4 inch square). It was the only colour film that I used as they were relatively expensive for me at the time, something like 22/6d.
Taken in the summer of 1962 as a result of a family holiday in the South West, I would travel the railway systems of the area taking photos whilst the rest of the family spent most of the time on the beach. I seem to remember buying a 'runabout' ticket for 10/6d which covered all the Exe Valley system at the time. "
Thank you very much to Barry for sharing your pictures and memories with us and if anyone else has any pictures or memories of the Exe Valley Railway that they'd like to share please do contact me.
If you would like to see more of Barry's pictures have a look at this excellent website, David Hey's Collection.

26/8/16  If you have visited Tiverton recently,you have probably noticed that there are some Tivvy Bumper sculptures placed around the town.This is Tiverton Museum's,"All Aboard" sulpture trail.There are 21 to find and 4 stamps to collect.This seemed like something my youngest two would find fun,so we set off one day to find them all.I had hoped to find them all in one go,but for various reasons it took us four attempts,but we did find them all in the end,as you can see in the pictures.

We started off by finding the ones that are dotted around the high street,but after finding these ones my two kids were a bit tired and needed the toilet,so instead of finding the rest we headed for the museum to use the toilets and see the real "Tivvy Bumper",as well as getting our first stamp.Many of the other sculptures you will probably need to drive to,as we did on another day.

On our third journey we went to Cold Harbour Mill,but due to me not checking the opening times,it was closed so we couldn't get the stamp.I would advise that you check the opening times of the Bampton Heritage Centre too,as it is not always open.The stamp at the Canal Visitor Centre is outside in a tin box,so you can get that stamp any time.By the way,to get these stamps,you don't have to pay to get in anywhere.Finally on our fourth attempt,after sitting in a massive traffic jam for an hour,we completed the trail and got all the stamps.

Overall,the trail was fun and my two children liked spotting the Bumpers and ticking them off the map.My only grumble is that the plaques on the sculptures had no information about the old railway and weren't very well placed.I understand that many were sponsored by local businesses and were placed where more people might see them,but they could have been more educational and placed at locations like,where West Exe Halt was,where Tiverton Station was,along the footpath that once was the Tiverton Branch Line and so on.The trail ends on the 30th of October when the sculptures will be removed and auctioned off to raise money for the museum.

13. Full Steam Ahead with HPS

My two little Bumpers that found them all with me


26/7/16 On a typical rainy bank holiday not that long ago,I took my lot to Dulverton to visit the model railway at Dulverton Heritage Centre.Just by chance there was a temporary exhibit all about Dulverton Station,which had some interesting stuff about the old station,but I don't know if this exhibit is still running or will return.

The model railway itself is housed outside the main museum building,in a small nearby outbuilding.The Dulverton Station Model Railway Exhibition,as it is known,is not always open,so you need to check the opening times before you visit.

The model itself is amazingly detailed and is probably the nearest you can get to actually seeing the station as it was.To see even a model train pulling into the Exe Valley platform,made the visit more than worthwhile and I would definitely recommend a visit.

15/2/16  I found a couple of interesting videos about the Tivvy Bumper.One of them is just a short clip of 1442 racing down the line and the other is a 14 minute film about the Bumper being moved to the museum.It's interesting how they actually built the museum building around the engine.Both films are well worth a watch.

13/11/15  I heard a tale about how children in Bampton used to stand on the bridge by the station and try to drop swedes,yes swedes, into the funnels of the engines,as they passed underneath.I can just imagine a group of swede ladden children cheering as they successfully get one in the funnel and then legging it when they see that the Station Master is staring at them!

20/10/15  I recently learnt that the bridge that I labelled "Bridge 4" in the article,"What it Looks Like Today:Bampton to Holmingham Farm and 6 Bridges",was actually known as,"Black Bridge" by Bampton locals and was where local children would meet to go swimming in the Exe.It seems that most of these iron bridges wherever they were located were also known as,"Black Bridge",due mainly to the fact that they were all painted black.

I also learnt that there had once been a plan to use the old track bed from Bampton to Tiverton as a cycle path,but that the farme 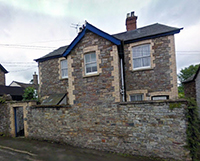 rs who owned the land had rejected the proposals.The plan was to replace the demolished "Bridge 4" mentioned above,with the old Stoodleigh Bridge that is now at Tiverton.What a boost to tourism and an asset to local people that would have been.

I was also told that this house in West Street,Bampton was made from salvaged materials from the old Bampton Station buildings.Although this is hearsay,looking at the building it looks very likely.

11/01/15 If you visit Bampton Heritage Centre that is in Bampton Church,there are some railway related items on display at the moment,including the signalman's lamp from Bampton Station,a railway telephone,some railway signs and the mechanism from a "spend a penny" railway toilet.